Hey everyone, sorry for the huge lack of posts! I really don't have an excuse beyond laziness, but I'll try and get back to somewhat regular updates!

Today I restocked my Cetaphil Gentle Cleanser, which has become my go-to for every possible facial cleansing need. Morning, night, pre- and post-makeup, this stuff is all I use. Frankly, it's brilliant, except for super tough gel eyeliner. My skin has calmed down a lot since using it and the Moisturising Lotion together, and I feel like I'm settled in a routine, unlike my old method of using whatever shiny package catches my eye on in bench/shower/cupboard pile. Which brings me to the title of today's post. I emptied out the bathroom cupboard and drawer today and discovered this: 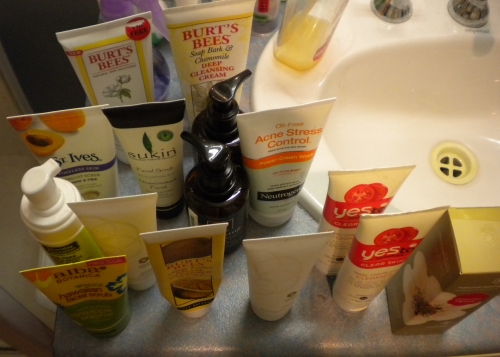 That's right: my bathroom contains fifteen separate cleansers (and scrubs, but only those that I used as daily cleansers). That's not including masks, make-up removers or other specialist products. I have back-ups of three I no longer use. I have a tendency to buy multiples of anything sparkly, vaguely effective, and on super-duper sale. This is a problem. I really should head straight to Hoarders Anonymous. Oops.

I know I'm not the only one in this situation, so do you have a tendency to hoard a particular product?

P.S. I attended Illamasqua's Beauty School Drop In at Chadstone last week. Tons of fun, lots of interesting tips, and a couple of purchases. I'll share all the details soon :)
Posted by Rachel at 10:31 PM 2 comments:

What is it with make-up?

Until about two and a half years ago, I scoffed at the idea of wearing make-up. To me it was a waste of time and money and I hated the idea of being reliant on anything for my self-confidence. I was happy in my own skin (though not as much as I am now) and wanted to stay that way.

Then I scored a job interview at a pharmacy, which is where I still work now. I ummed and ahhed about wearing make-up, since I'd never noticed anyone there who didn't wear it. In the end I did. I got the job (hooray!), but one thing led to another, and I didn't like the idea of going to work without the professional face I'd won the job with. At this point I owned two eyeshadow palettes, a mascara, a blush and two foundations that didn't match my skin tone. I believed make-up helped me fit in, which I welcomed.

Work was a good chance to learn and remember more things about make-up and show off my knowledge. I chatted with our cosmetics assistant a lot, trying to solve my own (real and imaginary) beauty problems and getting to know the ranges. I stressed about finding the right foundation for my skin, especially my very pale tone, and fretted about learning the techniques that everybody else seemed to know instinctively. Although it was my security blanket in the professional workplace, I still begrudged make-up its role in my life and rarely wore it otherwise.

About six months ago, I read an article in Cosmopolitan, which I normally stay far, far away from. It was hanging out in the tea room at work, and Olivia Wilde was on the cover. She'd written an article titled "Olivia Wilde's Confidence Manifesto", and I still hold it as one of the most honest and least judgemental pieces about beauty and fashion I've ever read. Aside from admitting to feeling "disproportionate and squat" without heels, Olivia makes some really clever points about why women shouldn't feel bad about wearing make-up, getting a bikini wax, or wearing said shoes. She calls them confidence triggers; things that help us "put the sass back in [our] strut". As a brief aside, this is why I'm so thrilled about Illamasqua's new collection, I'mperfection. It helps us realise and celebrate our so-called faults, and turn them from confidence killers to confidence triggers.

So that, my friends, is why I wear make-up. I don't do it everyday, or out of habit necessarily, but when I want to feel that little bit more confident, I know it won't let me down. I don't feel ashamed or manipulated if I slick on some mascara and concealer to go shopping, or if I go out for lunch with friends and my trusty blush. Because my make-up doesn't own my self-confidence, it's the other way around.
Posted by Rachel at 10:18 PM 3 comments:

Part 1 was getting lengthy, so here are the last couple of favourites for this month: 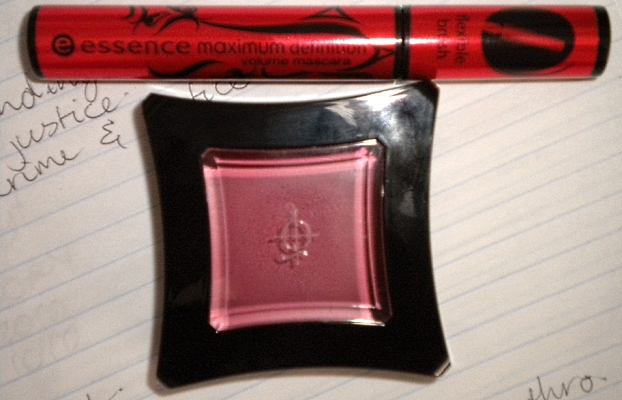 Essence Maximum Definition Mascara: Inside the tacky metallic orange packaging is a solid mascara that gives decent volume and definition with nearly no clumping. I wore this yesterday for work, then forgot to remove it before we went to the Australian Open in the evening, and there was not a smudge or flake in sight when I got home at midnight. It's as black as any other mascara I own, and has a fairly small, conical rubber brush that does a pretty good job at coating every lash. $5.50.

Illamasqua Cream Blush (Seduce): I've used nothing but cream blush since I purchased Illamasqua's Rude a couple of months ago, so it was time to get a second colour. Illamasqua describes this as "warm rose pink" but I'd tend to call it more of a raspberry. Excuse the terrible photo. I'll try and get a proper review with some swatches up soon. Like Rude, this goes on without a problem, blends easily, and stays on. Suffered the same test yesterday and passed with flying colours. I love this colour with a minimal make-up look, because it gives my face a pretty glow. $28 and worth every cent.
Posted by Rachel at 4:02 PM 2 comments:

Sorry for the neglect, lovely readers! January has been chock-full of running around, sweltering heat, and planning for my study abroad application! Nevertheless, I did have time to buy some great products, so here's a quick run-down of my favourites: 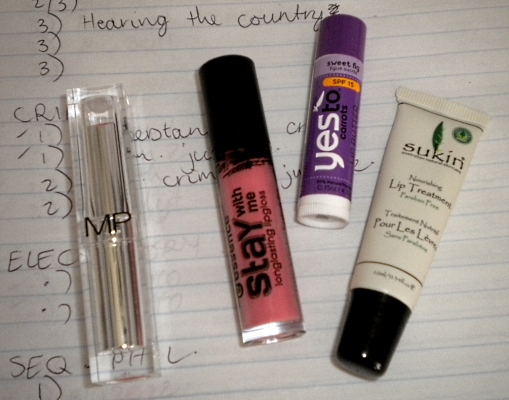 Models Prefer Moisture Lust Lipstick (Peach Ice Tea): This is a scary orange in the tube, but one sheer swipe gives a glossy wash of peach. It is buildable, but I doubt you'd reach full opacity. The formula is fairly moisturising, and looks good for about 2 hours on me. From memory there are about six colours. Psst-- the new range also includes a clear lip liner for those who don't want to shell out for the big-brand version. $11.99 for the lipstick, $7.99 for the liner.

Essence Stay With Me Longlasting Lipgloss (My Favorite Milkshake): Lovely creamy pink with no shimmer and enough pigment to even out your natural lip colour. Here's the kicker: this is far more moisturising than any lip balm I own! It lasts three to four hours and moisturises the whole time. That's a miracle for me, as I'm usually reapplying balm every hour or so. It comes in another couple of light pinks with slight shimmer, a coral/red and a deep purple-pink with insane glitter. Go buy one. $3.95.

Yes To Carrots Lip Butter (Sweet Fig, SPF15): Grabbed this on a whim when I lost a couple of my Burt's Bees lip balms. With SPF15, it's a great option for summer, and although it does leave a bit of a white cast, it's nowhere near as bad as the Burt's SPF version (which is only SPF8). Really good sturdy balm for everyday use. Comes in another four or five flavours, one of which is also SPF15. $5.99.

Sukin Nourishing Lip Treatment: I've been using this at night for the past couple of weeks. It's quite thick so stays on really well, if you can stop licking it off! Vanilla scented and flavoured. $7.50-$7.95 depending on the store.
Posted by Rachel at 3:51 PM No comments:

For a few weeks now, I've been hunting for a good chemical exfoliant, because my St. Ives one just isn't doing what I need it to do. Have a look at Lab Muffin for a good explanation of how these are different to your regular scrubby ones. Most of the products I found were either too expensive or not readily available near me, so I decided to make my own. In my journey, I came across a ton of recipes for pineapple or papaya based cleansers. These two fruits in particular have enzymes that are really good for clearing dead skin cells. No single recipe was exactly what I wanted, so I came up with something myself.

Pineapple Scrub/Mask
1/4 of a fresh pineapple, chopped into chunks
Approx. 1 teaspoon each of yoghurt, honey and oat bran
Flour or other thickening agent
Scrubbing ingredient of your choice (I use sugar)

Blend the pineapple, yoghurt, honey and oat bran together until you get a smooth-ish mix. If you can't access a blender/food processor, you could mash the pineapple and mix by hand. Add your scrubber until you reach the level of roughness you're after. You can skip this if you don't want a physical exfoliator. Add flour to make a paste if it's not thick enough to use easily.

To use, just smear it all over your face, avoiding the eye area. I use it on my lips every few uses too. Leave it there for a few minutes while you brush your teeth, wash your hair, or whatever else you need to do.

One of my favourite things about DIY skincare is that you can easily adjust recipes to suit your skin's needs. This version is great for my skin in summer, when it's a bit oilier, but I'll probably use an oil base instead of yoghurt in winter for some extra moisture.

Do you have any favourite DIY recipes to share?

P.S. Three days of using this and my skin looks airbrushed (at least as far as texture)!
Posted by Rachel at 5:05 PM 2 comments:

Rachel
Long-time-scientist, short-time-beauty enthusiast, Arts/Science student and Bones fan. Hoping to share a little bit of my world with like-minded people. Please comment or email me with any feedback!

Confessions of a Beauty Addict